Our Autumn term vehicle is "Going for Goal!"

This learning vehicle will have a focus on football, looking at health and fitness, countries around the world and footballing events throughout history. The children will also look at how we can promote equality and diversity in the game, encouraging all people to enjoy and take part in sport. The outcome of the vehicle is that the children will create their own website, which will showcase all of the work they have been doing this term.

The vehicle will begin with a trip top Stoke City on Wednesday 4th September.

During our trip to Stoke City we started the day with activities in their sports dome. We learned golf, cricket and football. We then did a classroom session all about nutrition, the diet of a footballer and why it is important to eat healthy. After that, we got to go on a tour of the stadium. We saw the trophy cabinet, lots of photos of the old club and players, sat in the match day seats, the dug out, walked down the tunnel and even visited the home and away changing room!

Making the digestive system in Science

Year 4 know how important it is for a footballer to keep hydrated with all of the activities they do each day, so we decided to investigate which drinks would damage their teeth! We know they drink alot of water, but we wondered what would happen if they drank lots of orange juice, squash, coke, lemonade and coffee. We have set up an experiment in class, using egg shell to act as our teeth. We have put half a piece of egg shell into a plastic cup and then put different drinks in the cup. We are going to observe them over the next week and find out what damage they could do if we drank lots of them!

Children were visited by Stoke City Ladies player Tash Tezgel as part of their Football vehicle. The children had the opportunity to ask Tash lots of questions about her career and ladies football. We were very lucky and all children were given a signed programme from Tash.

We were also joined by James, who does the media for Stoke. We heard about how it takes lots of photos and uses them to promote the team and make the programmes that are sold on match days.

We even learned a little bit about the history of ladies football. Did you know that when football began the ladies were more popular than the men and got a bigger crowd? When the FA was formed, all of the men that ran it banned ladies football to make the mens more popular!

The children then spent some time designing their own badge and kit for a ladies football team!

Year 4 were very lucky to have a visit from Championship referee John Brooks on Monday 4th of November. The children watched some video clips of John in action. Then, we got to try on some of his kit, look at the communication devices and have a go with them, use the red and yellow cards as well as looking at the flags used by the assistant referees and more! We then had a go at working as a team, to produce a product that could help or improve the current equipment that the referees use. We came up with some great ideas, such as a plastic wallet, to make sure players names don't rub off the yellow card and a watch that does all the functions a referee needs, such as goal line technology and heart rate, rather than having to wear two. We even had time at the end to find out a bit about John himself, such as what football team he supports and who his favourite players are! The children had a great time!

Year 4 have been making healthy yoghurt pots this week. We know that it is important for footballers to be healthy, so we designed our own healthy snacks!

Today, Year 4 have been looking at our school website. We are trying to get ideas of what makes a good website, so that we can have a go at making our own.

We looked at links, slide shows and how a teacher can edit pages.

Tima - "Class pages are useful because they give information about what children have been doing."

Sam - "I think the dinner menu is useful, because if children don't like that dinner parents know to give them sandwiches."

Rose - "I like that you can find information really quickly."

This week Year 4 have been looking at sound in Science. We looked at the different ways instruments make sounds. We found that the sounds were only created when we did something to the instrument, such as hitting it or shaking it

On Wednesday 20th November, we did a short experiment about sound in Science. We all went outside, half the class on the top playground and half on the bottom. When Mrs Jones blew her whistle, the group far away had to put their hand up as soon as they heard it.

When we were standing next to Mrs Jones, we noticed that the children on the top playground were delayed putting their hand up. This showed us that the vibrations which created the whistle sound, had to travel through the air and reach the other children. We then swapped places so the other group could see the dealy!

All of the children really enjoyed this experiment! 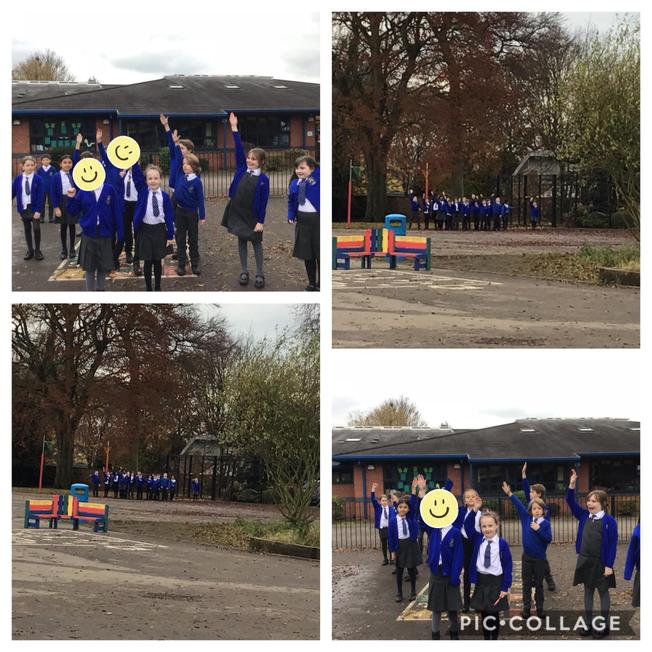