Science through our Curriculum Vehicles.

In Year 4 this year they have completed a vehicle dedicated to science.

Please click on the link below to explore some of the fabulous projects Year 4 completed.

" I love everything about Science, I want to be a scientist when I get older."

"I like learning about our bodies and our diet and exploring the foods that are good and bad for you."

"I loved learning about rocks. I thought they were just rocks and now I know there are igneous rocks, metamorphic rocks and sedimentary rocks."

"I love Science and I liked learning about our muscles and how biceps and triceps work together."

"I am very interested in Science as I am quite curious and love investigating and finding out things."

The Best of the Best.

Have you ever thought about why things are the way they are? I mean overtime someone invented the wheel and from that we eventually ended up with the wheels and tyres that are on cars. Science and the world of discovery and technology is all around us. Scientists thirst for and enthusiasm for learning has allowed them to overcome many hurdles put in their way and led to developments that we still see, use and develop today.

As part of International Women's week we have been exploring the amazing achievements and accomplishments of many inspirational Women. One such example is the amazing work of Marie Curie and her contributions to science. 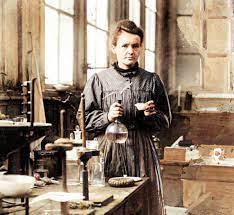 Marie’s greatest dream was to go to university. Unfortunately, at the time, it was unheard of for women to be in the field of academia so she was unable to study in her homeland of Poland. Therefore, Marie made the difficult decision to leave her beloved Poland and head for France, where the Sorbonne University in Paris was accepting women.

An avid reader and with a real thirst for knowledge, it is said that Marie Curie often forgot to eat and drink as a result of being so involved in her studies!

Marie was inspired by the work of Henri Becquerel. Henri had discovered radiation, which is tiny, high-energy waves that are small enough to penetrate the human body. Marie was convinced that there were highly radioactive elements that had not yet been discovered.

During one of her experiments, Marie noted that, when exposed to radiation, diseased human cells were destroyed a lot quicker than healthy human cells. This led to the discovery of radiation as a treatment for cancer: a treatment still being used today.

Did you know that for her amazing working Marie Curie became the first female to win the Nobel Peace Prize?

In 1903, Marie Curie was awarded a joint Nobel Prize in physics for her scientific discoveries alongside Pierre Curie and Henri Becquerel.